skip to main | skip to sidebar

Truly One of a Kind 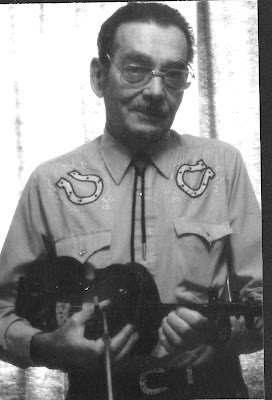 There is a fine line between tenacious and stubborn, and he didn't seem to know where that was.
In 1982, Doctors told him he would be in a wheelchair within 5 years.

A few months ago, he would use a walker whenever he could, and try to get away with using no help at all when he thought no one was looking.

"I'm only going from the chair to the bed," he would say.

Perhaps it was because he was resourceful by nature, growing up in a small town in 1930's Nova Scotia. During the Depression you had to make do with what you had on hand.

Perhaps it was due to his quiet genius that he was compelled to find ways to figure things out.

I've told the story of how he built a motorcycle out of spare parts and rode that from New Brunswick to Ontario, but that is only one example of his ingenuity and resourcefulness...

...In the early 1950's Pa and Ma had 4 small children and bought a large house in a small village. It had almost everything they needed, lots of bedrooms, large yard and a small garage. Everything but indoor plumbing. An artesian well at the end of the driveway provided water for all surrounding homes. Pa simply tapped into the wellhead and ran the pipe into the house. He converted one of the bedrooms into a bathroom, installed a septic bed and plumbed the entire house.

Eventually, he drilled a well to supply the house. With the clearest water being below the hard pan, this was difficult. Drilling was expensive, and money was always tight on mechanics wages.

I can remember two well events. One involved driving a pipe down to the rock, dropping a point into the pipe, and following that with a half a stick of TNT. The blast drove the point though the rock into the water. That well lasted several years. For the next well, he built a pile driver. The rig used 3 long poles set up as a tripod, block and tackle and the driver run by the drive wheel of a 1964 Mercury with the tire removed from the rim.

...When music became amplified, his violin wasn't. He took the pick up from an electric guitar, fashioned a clip to hold it to his fiddle, and Viola! His first electric violin!

...When my Brother's constant pounding on the piano interfered with the TV, a series of jacks were installed on the side of the cabinet and headphones were adapted. Taa- daa, personal viewing in the 1960's.

...In the 60's and early 70's he worked for an AMC Dealer. When the 1971 Javelin came out with its rear valve cover bolts under the firewall, AMC's solution to get at them was to drop the rear cross member and tilt the motor back. Pa's solution was to design and build a wrench bent in such a way to get at them. AMC eventually made these wrenches available to all their mechanics.

...In the 1970's Pa went to work for the City. Every year, plow operators would forget where the manhole lids were, and with the first snowfall, would tear chunks out the plow blades. His solution was to put 1" high 'skids' on the bottom of the blades, saving them from extreme damage. This is now a standard attachment on all snowplows everywhere.

...The garage where we fixed our own cars was at my Aunt and Uncle's house nearby. When it burned down in 1981, everyone chipped in to rebuild it, bigger and better. The new garage lacked an air compressor, and those were prohibitively expensive at the time. The Old Man cobbled together a unit comprised of 2 HP electric motor, a 2 stroke lawnmower engine, a small water tank and a limiting switch. It wasn't strong enough to run air tools, but it could fill tires and run a paint gun. It still works.

Over his lifetime, he became the go to guy to solve all types of mechanical, electrical and general engineering difficulties.

If it could be built, he could build it.

If it could be fixed, he could fix it.

If I've learned one thing from him, it was to never give up, there is always a solution. Tenacity was his chief virtue.

There is a fine line between tenacious and stubborn, and he didn't seem to know where that was.

They told him years ago he only had months to live.

He proved them wrong again.

Somewhere, the sweetest fiddle music plays again.
DJW
Posted by DJW at 7:15 AM

He didn't get to see it himself until a few years ago.

I apologize for the sync being off a bit.

He seemed to be an incredible man DJ. You, Alice and the girls must have had a great time just being around him.

I had the honour of spending time with that wonderful man...he always made me feel welcome..my love to you and your family DJ.

Thanks, DJ, you said it best. I sent your link to many of my friends and they have all commented on what a great tribute you paid to dad. See you next summer.

A beautiful tribute to an amazing man. And a fascinating life story - have you ever considered writing more of this? Examples of this sort of ingenuity should be preserved.

DJW
Ontario, Canada
I'm too old to be the Angry Young Man, too young to be a Grumpy Old Man, so I am The Irritable Middle Aged Guy. From time to time I will share with you my wisdom, my experiences, my observations, but mostly things that make my shorts creep up. My accomplices include M.D.B. (My Darling Bride) and my offspring, Thing 1, Thing 2, our Nephew, Boy Thing, Kelsey D. Puppy, Gus A. Kat and the newest member of the clan , Grandkid Thing! Welcome aboard! My entries may not be regular (regularity may be a topic, after all, I am middle aged!), and I may not always confuse the issue with facts, but everyone is entitled to an opinion, mine!